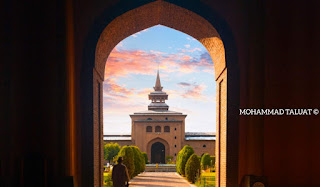 Image : Mohammad Taluat ©
It was built by Sultan Sikander Shah in 1398 AD.The construction was completed in 1402 AD. Right from its inception, tragedies have been inherent to the mosque. Zain-ul-Abidin, the son of Sultan Sikandar later felt the need to extend this mosque to more people and he made way for a whooping number of 33,333 Muslim members to offer prayers. After the extension of this mosque it was once destructed in 1479 due to fire and then re-built.

The reigning sovereign, Sultan Hasan Shahm, then set about its reconstruction with greater splendor. Unfortunately, the king died before completing his task, which was then brought to a successful end in 1503 AD by Ibrahim Magre, Commander-in- Chief of Kashmir forces under the reigns of Muhammad Shah and Fateh Shah.

In 1620, under the rule of Jehangir, a severe conflagration again broke out in Srinagar and destroyed twelve thousand buildings including Jamia Masjid. King Jehangir ordered its reconstruction which took 17 years,this was re-constructed by an architect based in Kashmir who was also a historian named Malik Haider Tsodur.

In 1674 AD, third blaze consumed Jamia Masjid. This was during the rule of Aurangzeb. When Aurangzeb heard of the accident, he first enquired whether the chinars were safe for ‘the mosque could be rebuilt in a short time. A full-grown chinar can never be replaced.’ He engaged all the bricklayers and masons of the city and the mosque was completed within three years.The magnanimous mosque was damaged by fire on three occasions but the damaged portions were restored after every disaster.

The last restoration work was carried out under the reign of Maharaja Pratap Singh.Today, this mosque stands tall like the pride of Srinagar, holding within itself rich stories from the past and calling all Muslims to pray five times a day. While delving into the origin and history of Jamia Masjid, the name of Maharaja Pratap Singh surfaces several times as it was during his reign that the maintenance and repair works of the mosque was carried out. Singh enthusiastically encouraged the reconstruction of Jamia Masjid many times and even offered financial assistance

Jamia Masjid has an area of 384 X 381 feet. It is quadrangle in shape, roughly square, with four minars; one in the middle of each side covered with a series of pyramidal roofs which terminate in an open turret crowned by high pinnacle. The minars are connected by spacious halls, whose principal feature is the vast array of 370 wooden columns which support the roof. On the outside, the mosque is decorated with yellow poppies lining the mossy brick paths and lush green parks.The Masjid has a fountain/cascade measuring 33 feet by 34 feet which is also used for wadu (ablution).

Jamia Masjid can accommodate more than 33,333 people for prayers at one time.Large entrance gateway is covered with a pyramidical roof surmounted by a square open pavilion (brangh) with a spire on top. At the entrance of the mosque, an architectural document by INTACH, an NGO, welcomes the visitors, “Jamia Masjid is a local adaptation of the enclosed courtyard type mosque plan prevalent throughout the Islamic world,” it reads.

The main entrance on the southern side consists of a recessed portico leading into an inner courtyard based on the traditional chaar bagh plan with a tank at the centre. The court which was originally planted with a series of chinars is enclosed by arched liwans (cloisters) covered with two tiered sloping roof.The western wall of the cloister houses a black marble mehrab with beautiful calligraphic work. Ninety nine attributes of Almighty Allah have been engraved on it. The courtyard is made up of pointed arched, brick arcade which lends a solemn atmosphere to the whole area. The upper clerestory is reached through twin staircases located in the jamb of the arch along the western facade. The compound is bisected by two broad paths which have been planted with cypress trees. The water tank in the courtyard was originally fed by a water channel known as Lachma Kul.

The Jamia Masjid during the last thirty one years of turmoil in the valley has been a hot spot but this year it has been all the more in news for the fact that no congregational prayers were allowed for nineteen weeks after Burhan Wani's death. No Eid prayers were offered at the mosque for the first time in nearly two centuries and to mention it was closed for Eid prayers way back in 1821. Mirwaiz Umer Farooq, who usually delivers sermon before the Friday prayers, was under house arrest and not allowed to visit the mosque.

The frequent stopping of prayers in the historic Jamia Masjid is not new-fangled. The centuries-old tradition is still continuing, much to the disenchantment of lakhs of devotees who would like to offer the congregational Friday prayers regularly in the Mosque. The practice to disallow prayers at Jamia Masjid began in 1819. It first happened during the time of Maharaja Ranjit Singh when then Governor Moti Ram put restrictions on offering prayers in Jamia Masjid. The restrictions remained in force for a long period of 21 years.When the-then Governor, Moti Ram, put curbs on offering prayers in Jamia Masjid,” writes historian Shams-ur-Rehman. “That time, no prayers were offered and no call for prayers was given from the mosque.”

After 1898, the mosque remained open, though it was closed occasionally. Prolonged closure came into effect since 2008 when the Amarnath land row erupted. The decision of the Omar Abdullah government to prevent people from offering Friday prayers for weeks together led to massive outrage. A local daily, during unrest of 2008, summed up this development beautifully, “Given the historical fact the National Conference, until the 1980s, made the Dargah of Hazratbal subservient to its ideology. And if presently, Mirwaiz (Umar Farooq) is using Jamia Masjid for political purposes, he cannot be expected to discredit the legacy that he has inherited from both his forefathers and Sheikh Abdullah.”

Ban on religious congregations in 2008 was seen as an attempt to choke the rebellion whose epicenter was the hotbed of separatist leaders, the areas in old city, particularly around Jamia Masjid. According to political analysts, Jamia Masjid is a politico-religious space and it has remained so before and after 1947. They say it has remained a centre of comprehensive power, alternative politics and alternative political discourse. “This is demonstrated by certain post-1947 political events like 1953, 1964 theft of Holy Relic from Hazratbal shrine, and Indira-Abdullah Accord of 1975. Late Mirwaiz Farooq led a demonstration against the Accord from Jamia Masjid to Lal Chowk,” a political analyst told a local daily during the recent shutdown of Jamia Masjid in 2010.

Interestingly, the martyrs of July 13, 1931 were taken to Jamia Masjid after the police opened fire and 22 people were killed and hundreds injured. This day continues to be observed as Martyrs’ Day since 1931, a day when the exploited and suppressed people of Kashmir openly rebelled against the regime of Maharaja. Against the advice of Sheikh Muhammad Abdullah, a big crowd rushed to Srinagar central jail where Abdul Qadeer, a non-Kashmiri, was to be tried for treason within the central jail premises. The mob pelted stones at the governor, Raizada Trilok Chand, when he ordered their dispersal. This set all guns ablaze, resulting in devastating consequences

The bodies of the martyrs were laid in the compound of Jamia Masjid. Sheikh Abdullah, Mirwaiz Maulvi Muhammad Yusuf Shah and other leaders started delivering speeches against the Maharaja. At the suggestion of Khawaja Noor Shah, all the martyrs were buried in the compound of Ziarat Naquishband Sahib, Khanyar. The soldiers arrested about 700 Muslims in the city. The next day, the leaders of the Muslims, namely Sheikh Muhammad Abdullah, Chaudary Ghulam Abbas, Moulvi Abdul Rahim and Sardar Gohar Rehman were arrested and Sheikh Abdullah was locked in a solitary cell of the Hari Parbat Fort

The Maharaja had failed to curb this upsurge and appointed Pandit Hari Kishan Koul as the new Prime Minister of the state and issued orders for the release all political prisoners except Abdul Qadeer Khan Ghazi who was given five years rigorous imprisonment. A compromise was reached between the leaders of Kashmiri Muslims and the Maharaja through the efforts of Maulana Abdul Kalam Azad. At a public meeting in Jamia Masjid, the Muslims cursed both Shiekh Muhammad Abdullah and Mirwaiz Maulvi Muhammad Yusuf Shah, accusing them of compromising the sacrifices of 1931 Martyrs. But both of them explained in their speeches that they will not serve as traitors and will shed their blood, in case the Maharaja fails to redress their grievances within a month.

In his speech at the Jamia Masjid on July 10, 1931, Sheikh Abdullah had said that “Maulana Abdul Qadeer Khan Ghazi has been prosecuted for the cause of Islam and for the Kashmiri Muslims. He asked the people to pray for his acquittal and show complete solidarity with him.” In his another speech, he had asked the Kashmiri Muslim to prepare themselves for sacrifices for the sake of Islam.

In Sheikh’s own words, “The year 1930 dawned. How could I have known that the nation was on the brink of an eruption? The trampled pride and hope of the people of Kashmir was like molten lava to flow. Nature fanned the embers which were smoldering inside me. It was left to me to take the lid off the volcano’s mouth”. In spite of his avowed secular credentials, Sheikh Abdullah never severed his mysterious political ties with the Masjids and shrines till his death.

It is this mosque where Quiad-e-Azam of Pakistan Muhammad Ali Jinnah attended the annual session of the Muslim Conference on Saturday 17th June, 1944. The president of the historical session was Chaudhary Ghulam Abbas Khan. It is said that roads leading to Jamia Masjid were filled with people and hundreds and thousands of Kashmiri Muslims came to hear the Voice of Quiad-e-Azam where slogans reverberated through the walls of the Jamia Masjid. It is learnt that Sheikh Abdullah, Bakshi Ghulam Mohammad and Maulana Sayed were watching the proceedings from the vicinity. It took twenty minutes for Jinnah to begin the proceedings of his speech amidst the huge sloganeering and cheering.

The Jamia Masjid has primarily played a significant role in imparting religious education. However, with the spread of modern education among Kashmiri Muslims, and with the efforts of Mirwaiz Ghulam Rasool Shah, the Masjid began to play a determining role in the growth of political consciousness. Sheikh Muhammad Abdullah was, in fact, initiated into Kashmiri Muslim politics at Jamia Masjid by Mirwaiz Muhammad Yusuf Shah.

Jamia Masjid is a politico-religious space and it has remained so before and after 1947. It has remained a centre of inclusive power, alternative politics and different political discourse. This is demonstrated by certain post 1947 political events like 1953, theft of Holy Relic from Hazratbal shrine in 1964, and Indra-Abdullah accord in 1975 It has the magnitude of a political platform which no other mosque in the Valley possesses. Apart from delivering religious sermons, leaders send political messages across from it. The mosque thus remains a unique synthesis of religion and politics. It has an inimitable history, a symbolic position, a position that has made it important in the political background and turmoil of Kashmir. Closure of this Mosque is seen as an attack not only on the religious freedom of Kashmiri Muslims, but also has political connotations attached to it.

The fact that this mosque was built in 1400 A.D. proves the ancient heritage of this mosque. This mosque is reflective of Islamic art along with cultural history, both of which add to its charm. The mosque is proud testimony to legacy of architecture in J&K. It also showcases the rich culture of Islamic religion.The mosque is the pride of Kashmir. The Kashmiris have been attached to this mosque for far too long. The generations after generations have visited this place to pray in solitude and for their peace of mind. The mosque has to be treasured and its beautiful history has to be protected for the generations to come.